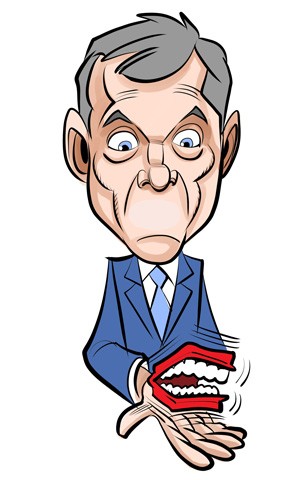 Controversial statements from former Oklahoma City mayor Kirk Humphreys are becoming more frequent and harder to keep up-to-date on than new The Fast and the Furious movie sequels.

At a time when local anger was beginning to die down against the John Rex Charter Elementary School board member and former University of Oklahoma regent, The Lost Ogle threw gasoline on the fire when it published undated, unsourced audio clips from Humphreys. The clips are uploaded to YouTube and attributed to an account with the name “David Humphreys.”

The quotes in the former mayor’s voice are candid and cringe-worthy. Topics range from the roles of husbands (“to lead,” he says) and wives (“to follow”) to how a woman’s appearance affects the way he interacts with her.

Included in the many sound bites are some of Humphreys’ thoughts on your favorite fiercely local and independent newsweekly.

“The front half is fairly good on news,” he said in an undated clip. “The back half is kind of the erogenous zone of the city.”

Humphreys, at least in the provided audio clip, did not elaborate on which parts of the paper he thinks qualify as “erogenous.” Our mouth-watering restaurant reviews certainly get things hot and heavy, so it could be that. Or maybe Humphreys is worried about the music stories. You know, kids with their gyrating hips and their electric guitars and (probably) smoking that danged devil’s grass.

But no, we can’t give the writers too much credit. The former mayor was almost certainly talking about the occasional advertisements for lingerie, bars and adult businesses. Heaven forbid the city’s innocent eyes should fall across things that are actually — gulp — fun.

Still, Humphreys had other things to say about the paper’s writing content. He said in a subsequent clip that Gazette has a tendency to “embrace any kind of goofy idea that comes down the road.” You know, wacky concepts like gender equality and the rights of people with non-hetero orientations.

It’s OK, Humphreys; we don’t need you to be a fan. We wear our “erogenous” badge with pride.