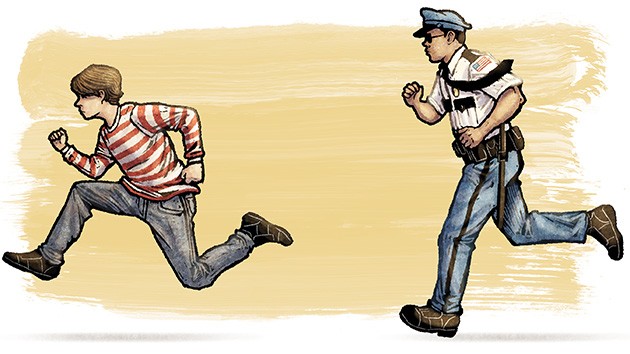 In the most famous scene in the movie version of The Fugitive, Harrison Ford’s Dr. Richard Kimble escapes Tommy Lee Jones’s Samuel Gerard by taking a death-defying plunge off the side of a dam.

One difference between that cinematic scene and a real fugitive case that played out at Will Rogers World Airport is that law enforcement was present when the suspect made a leap of faith. The other difference is that the suspect — a teenager wanted for felony burglary in Cleveland County who was being extradited from Houston — was easily apprehended.

Apparently, there was a miscommunication between law enforcement entities that allowed the teenager to be without law enforcement supervision after his plane arrived from Houston in late November, according to KOCO.

The suspect leaped off the plane and ran across the tarmac before jumping 22 feet from a building and broke an ankle. According to KOCO, Cleveland County deputies were told by Oklahoma City Police Department (who has jurisdiction at the airport) to wait for the suspect in their car outside the terminal because the police thought the suspect was being escorted by Houston law enforcement.

“The appropriate protocol does not appear to have been followed on our end,” Oklahoma City Police officials told KOCO.

Maybe local law enforcement officials will be ready with an Oscar-worthy speech like the one Tommy Lee Jones gave in the 1993 film the next time they’re in charge of a fugitive extradition.