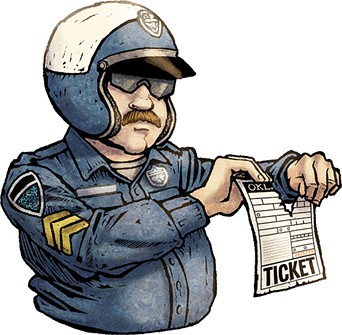 If you have been avoiding paying fines for traffic violations in Oklahoma City for two years or more, congratulations — your strong-arm negotiation tactics are finally paying off.

Beginning this month, an Oklahoma City Council-approved amnesty program will allow drivers to resolve old citations and court fees, including failure to appear charges, for less than the original fine in some cases. Drivers citing financial difficulties might be eligible to have their costs waived or reduced after a hearing with a judge.

“People who have dragged their feet to pay a basic traffic ticket or show up for court will be able to settle for $155, a reduction from $613,” The Associated Press reported. “The cost of the same ticket for someone who pays on time is $172.”

If you are a non-foot-dragger prone to paying your traffic tickets on time, you might be feeling like a sucker right now, unless you consider not having a warrant out for your arrest for two years worth $17. If you have spent the past two years either riding the bus or riding dirty, you might be tempted to think this is some kind of trap, but according to the City of Oklahoma City’s website, municipal court administrator LaShawn Thompson said the amnesty program is simply intended to allow Oklahoma drivers to get back on the road and on with their lives.

“Beyond encouraging compliance with enforcement of our ordinances, this makes sure an old speeding ticket isn’t the reason someone has trouble getting to work or to school,” Thompson said. “People can close the case and it won’t be hanging over their head anymore.”

You can pay tickets or request a financial difficulty hearing by calling 405-297-3898 or visiting the Municipal Court Customer Service Window, 701 Couch Drive, 7 a.m.-7 p.m. every day but holidays, and on behalf of the millennial-ish members of the Chicken-Fried News staff, we need everyone to keep this same live-and-let-live energy when discussing student loan forgiveness.