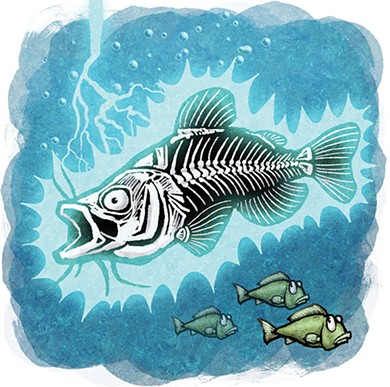 According to the Oklahoma Game Wardens Facebook page, a phrase that is a can’t miss conversation starter at any party, three game wardens spotted illegal electrofishing along the Kiamichi River in southeast Oklahoma on July 6.

“After making the observations, wardens raced to a nearby boat landing and waited for the fishing crew,” wrote whoever is in charge of the Oklahoma Game Wardens’ social media presence.

We picture this went down exactly like the climactic boat chase scene in John Woo’s Face/Off, but afterward instead of emotionally reuniting with their old faces or whatever, our protagonists in this story “discovered an illegal electrofishing device, wire leads, and 10 catfish that had been shocked and held in a boat’s live well.”

The Facebook post went on to state that “multiple charges are pending.” Unavailable for comment were the 10 catfish photographed lined up along a pickup truck tailgate looking dead as hell.

Electrofishing, which uses direct electrical current to lure fish and temporarily stun them, is a method employed by scientists studying fish populations but is illegal when done recreationally. This is, of course, not to be confused with blast fishing, or using explosives such as dynamite to kill large groups of fish for easy collection, which is also illegal — unlike regular fishing, where you simply trick a fish into biting into a food it likes to eat, impale its jaw with a hook and pull it out of the water to suffocate.

Also not illegal: just sitting quietly by the water with your thoughts and leaving the poor fish to go about their day, which is probably stressful enough without all the attempted murder, thank you very much. If you really want to shock a fish, try using a net to pull some of those plastic bottles and grocery bags out of the water.