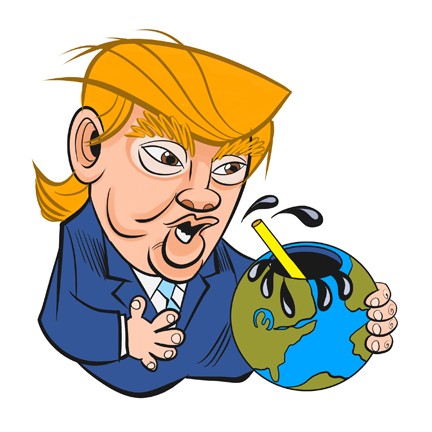 Oklahoma oil magnate Harold Hamm could be getting a big promotion soon. USA Today reported the Continental Resources owner and Donald Trump campaign advisor — whom Trump calls the “king of energy” — is rumored to be a candidate for energy secretary in Trump’s cabinet.

Fortune reported the president-elect, in a speech at a shale gas conference in Pittsburgh, Pennsylvania, in September, vowed to “eliminate all ‘unnecessary’ regulations in the energy industry and place a temporary moratorium on all new regulations that aren’t compelled by Congress or public safety.”

Naturally, Hamm agreed. He believes the government has greatly impeded the oil and gas industry and the regulations gotta go.

“There’s so many of these overreaching regulations that’s gone on. My goodness. We called it death by a thousand cuts, and that’s exactly what it was intended to do,” Hamm recently told CNBC’s Power Lunch.

CNBC reported that Hamm thinks the government should lease more federal land for drilling instead of “holding back exploration and productions firms like Continental.”

The news channel also reported the Bureau of Land Management only issued 852 leases for drilling in 2015, down from 2,188 leases in 2011.

USA Today and Washington consulting firm ClearView Energy Partners reported that the new Trump administration changes could include coming to the aid of controversial projects like the Dakota Access and Keystone XL pipelines and revise exporting and disclosure requirements related to climate change risks. Fortune reported that other rules could reverse protections of waterways and eliminate the Clean Power Plan.

Changes, they are definitely a-coming, and there’s a chance they could have Hamm all over them.