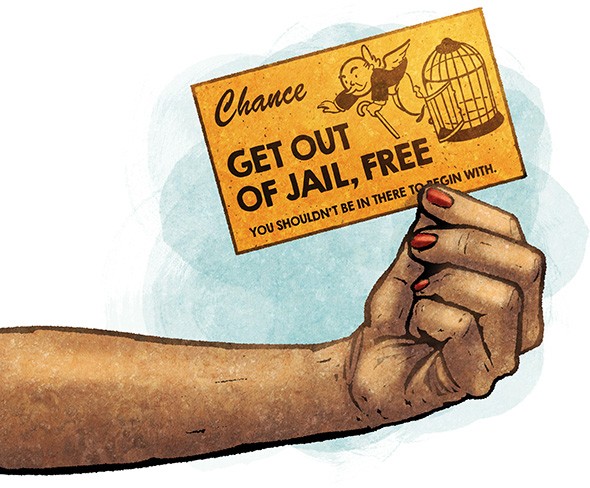 In accordance with journalism’s “Man Bites Dog” rule, Oklahoma has been making national headlines recently for — get this — actually letting people out of prison. First, as reported on Nov. 4 by CNN, the state released more than 460 nonviolent inmates before their original sentences were completed in the largest single-day mass commutation in U.S. history. Gov. Kevin Stitt told the newly free Oklahomans, “We really want you to have a successful future,” and we really hope he means it. The number of people released en masse equals about 1 percent of the 43,000 Oklahomans the Prison Policy Initiative estimates are currently incarcerated.

Then, on Nov. 8, CNN reported another almost-kind-of-in-a-sad-way-positive Oklahoma story when Tondalao Hall, 35, was released from prison after serving 15 years of a 30-year sentence for “failure to protect” her 3-month-old daughter from child abuse.

“In 2004, Hall and her then-boyfriend, Robert Braxton, were arrested on child abuse charges after she took two of her youngest children to the hospital,” CNN reported. “In 2006, after serving two years in county jail, Braxton pleaded guilty to two counts of abuse. He was sentenced but given probation and released from custody.”

Meanwhile, Hall, who pleaded guilty to enabling child abuse, was sentenced to 30 years in prison. In a statement released before she was, Hall thanked God for keeping her “safe and sane” during the time she has already served, but to give you an idea of how long 15 years is, here’s an incomplete list of things that have happened while Hall was in prison: We’ve had three different presidents and popes; five Star Wars films were released; Kanye West went from telling a live national audience that the president doesn’t care about black people to wearing a MAGA hat in the Oval Office; and Hall’s children have aged 15 years.