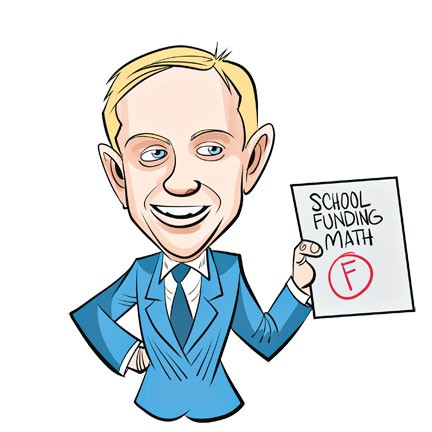 You know those reported massive cuts to education funding Oklahomans have been hearing about for years? Well, no need to fear! There’s a state representative out there who wants you to know these reports are another example of that gosh-darn “fake news.”

In an email to fellow state lawmakers, Rep. Michael Rogers, R-Broken Arrow, cited data from the Oklahoma Cost Accounting System (OCAS) to argue that the state has actually increased per-pupil funding in recent years. Rogers’ email was published by KFOR and other state media outlets.

“I know there is a lot of talk about educational funding and the massive cuts we have caused education (fake news), but numbers don’t lie,” Rogers writes. “I have included a link to the OCAS system (for verification) and you can see how we have increased funding per pupil every year since 2010.”

The chart he links to includes all sources of funding, including federal sources. State allocations set by the Legislature have dropped by more than $180 per student since 2008.

In a statement response, Steffie Corcoran, executive director of communications with the Oklahoma State Department of Education, said Rogers’ data does not take into account the steadily rising costs of education, which have easily outpaced raw per-student spending.

“Without question, the funds that remain for students continue to diminish,” Corcoran’s statement reads. “Oklahoma’s average per-pupil expenditure is the lowest among our neighboring states.”

Sure, it would be nice to simply wish away our state problems as the crafty work of weirdly vindictive journalists: “Overcrowded prisons? Rampant statewide heart disease? Fake news, I say!”

But while numbers might not lie, they can easily be used out of context to mislead. And that’s some news on which you can comfortably depend.