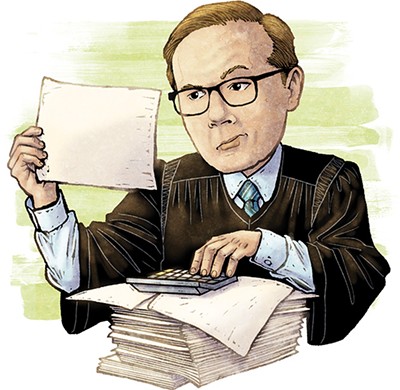 We here at Chicken-Fried News would calculate that Oklahomans are as good at math as just about anybody. Unfortunately, that might be because, as Oklahomans, our math scores fall below the national average, according to the 2017 National Assessment of Educational Progress, so we have to assume our calculations might be a little faulty.

Maybe multinational drug kingpin Johnson & Johnson is making a similar assumption. Ordered in August to pay Oklahoma $572 million dollars for helping exacerbate the state’s opioid crisis, Johnson & Johnson is currently apologizing profusely for its part in driving a drug-soaked stake into the American heartland. Just kidding, of course. The Associated Press (AP) reports the company is currently appealing the court’s ruling, arguing that Cleveland County District Judge Thad Balkman miscalculated the settlement amount by more than $100 million, due to “a mistaken addition of three zeros.”

“Johnson & Johnson maintains the miscalculation resulted in the amount the judge awarded for the costs to the state for developing and disseminating information on treating babies born addicted to opioids,” AP reported. “The cost of these services should have been about $107,000, not $107 million, attorneys wrote.”

Johnson & Johnson’s attorneys have also warned Judge Balkman’s “novel ruling” — that aggressively and misleadingly marketing a highly addictive prescription drug in a state where 4,653 people died of opioid overdoses between 2007 and 2017 qualifies as a public nuisance — may have threatening implications for companies doing business in Oklahoma. Does that mean that big pharma might be more reluctant to get Oklahomans, including newborn infants, hooked on potentially deadly drugs in the name of creating more value for shareholders? That’s sure what it seems like to us, but unfortunately, it’s difficult to know for sure because Oklahomans also score lower than average in reading. If only some multibillion-dollar drug cartel could explain it to us.