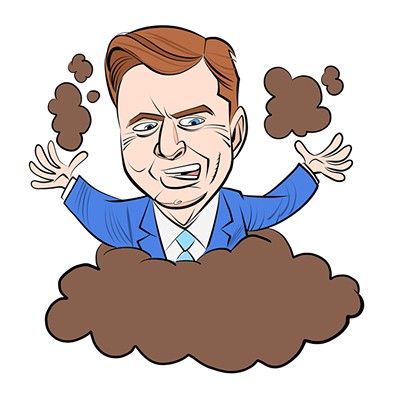 Let’s just call it now: Oklahomans heretofore will think of 2018 as The Year of “Bull-Stitt.” In last month’s runoff, Oklahoma Republicans went beyond mudslinging and began launching pork production-grade super-feces against one another like trebuchet-wielding maniacs.

But beyond Mick Cornett’s “Bull-Stitt” epithet, which was a little clunky but could stick like meconium if Republican gubernatorial candidate Kevin Stitt gets elected and proceeds to turn us into Kansas, the high-velocity poop launch came from Tulsa attorney and professional former fighter pilot Gentner Drummond.

The former candidate for Oklahoma attorney general conceded to incumbent Mike Hunter on Aug. 29 after a nail-biter defeat. But before he lost, Drummond put out a final campaign ad that was so toxic in its putridity that Chicken-Fried News staffers can’t quite get the stench out of our flight suit-style uniform jumpers.

In the 30-second spot, narrator Mr. Scoldy Voice accused “D.C. lobbyist and corrupt insider Mike Hunter” of handing illegal immigrants 300,000 jobs through his support of former President Barack Obama’s stimulus bill. That, of course, was Obama’s response to the Great Recession that kept the United States of America from having to panhandle for money from Greece.

From there, it’s Hunter this, Obama that, illegals this, dog whistle that. Then he draws the most egregious line, saying that Hunter’s alleged super-coziness with an alleged Kenyan led to Iowa college student Mollie Tibbetts' murder by an illegal immigrant.

Tibbetts’ family spoke out against the politicization of her death, but there are always people out there who do not respect mourning families or basic decency, and some of them live in Oklahoma. The ad was received with appropriate outrage and even drew fire from Mayor David Holt, who has been more or less apolitical since leaving the state senate.

“The current crop of political ads is about as gross as I’ve ever seen, but the one painting our Attorney General as responsible for the murder of Mollie Tibbetts should render the candidate behind it unfit for public office,” Holt tweeted two days before the election.

Here’s the problem: Even with such venality being projected through that ad, Drummond only lost by 269 votes. That means a lot of Oklahomans support the exploitation of murdered college students for political gain. CFN prefers to make jokes most days, but after this close runoff, we’re too busy catching our breaths from all those sighs of relief.