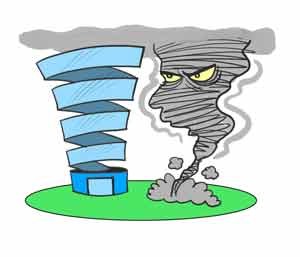 In a state situated in a stretch of land called Tornado Alley and renowned for its weather casting, isn’t it strange that we don’t have a weather-inspired structure, such as a building shaped like a tornado?

Well, architecture firm Kinslow, Keith & Todd has done it. The real question is, Why Tulsa?

A post on news.discovery.com reports that the firm proposed a tornado-shaped glass building for the downtown Tulsa area. It would include several outdoor terraces, a revolving restaurant, a weather research center, convention space and an Oklahoma weather museum.