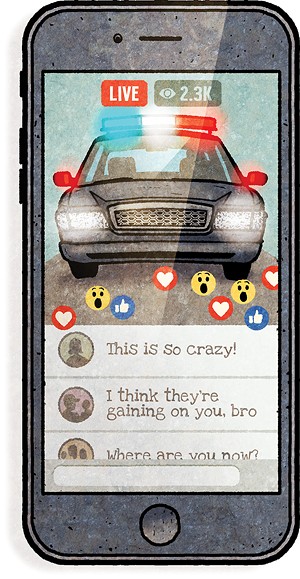 Remember the guy who led law enforcement agencies on a three-hour high-speed chase with a stolen vehicle in 2017? You might have seen him live on any local news station or on his personal Facebook page where he was broadcasting a big part of the chase.

“I’m thinking, hopefully, if I get to Cleveland County, I’ll get to go to jail there and not Oklahoma County,” Brenton Hager said on his broadcast. “I’m not trying to go back to Oklahoma County.”

The Oklahoma County jail is low-hanging fruit at this point what with all the plumbing issues, mold problems, understaffing, overcrowding and the fuzzy timeline for its new jail administrator to take over, so we’ll leave it alone for this Chicken-Fried News entry — but we’ll absolutely follow up in 2020.

Hager weaved through the Oklahoma City metro and ultimately ended up driving through a field and into a pond before trying to escape on foot and being hit with a Taser, taken into custody and charged for a litany of crimes. He was released on bond but found himself back in jail about a month later for stealing another car.

Last week, Hager pleaded guilty to three felonies — assault and battery, endangering others while eluding and unauthorized use of a motor vehicle — and four misdemeanors. The Oklahoman reported that Hager received a 20-year sentence for each felony but will serve them concurrently as part of an arrangement with prosecutors. His response to a 20-year sentence?

“Go big or go home,” he told reporters as he was escorted out of the courtroom.