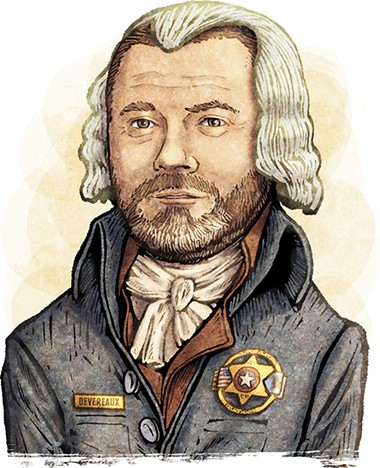 Two Oklahoma county sheriffs recently declared that their counties are sanctuaries. “Sanctuaries for what?” you might ask, hopefully.

We’ll give you a hint: The sheriffs of these two Oklahoma counties — Logan and Stephens counties to be specific — are concerned with protecting a certain constitutional amendment from any and all laws that might somehow be seen as infringing upon it. If you guessed the First Amendment (i.e., freedom of religion and expression) or the Third-27th (i.e., any of the other amendments that aren’t the one that says you can have a gun) you’re either brand new to Oklahoma or an incurable optimist. Logan and Stephens counties are, of course, joining the national trend of self-proclaimed “Second Amendment sanctuaries,” safe havens where any newfangled gun control laws will not be enforced.

“Do I think anybody’s going to come in here and take our guns here in Oklahoma? No,” Logan County Sheriff Damon Devereaux told The Oklahoman. Devereaux, The Oklahoman reported, is only “aiming to head off any gun control talk, policies or legislation in Oklahoma.” Well that’s a relief.

State Rep. Jason Lowe, D-Oklahoma City, whose legislation to repeal the permitless carry law recently failed in committee, called the county’s sanctuary resolution “a political stunt that has nothing to do with public safety and everything to do with the sheriff’s politics.”

Fortunately for anyone worried about the safety of their guns (as opposed to any other possible meaning of the phrase “gun safety”), several of our state legislators seem to be always hard at work making sure there are more guns, not less, just about everywhere. Can mandatory gun possession laws be far behind? Perhaps someday soon, Oklahomans will be able to have ourselves legally declared as guns and our elected officials will start caring about our rights, too.