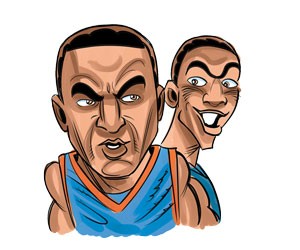 When Kendrick Perkins thinks about trying to score on the basketball court, his best course of action is to just pass the ball. Besides the occasional wide-open dunk, Perkins’ role for the Thunder is not to give the team points. Even when he has an open look, passing the ball to Kevin Durant, Russell Westbrook or even the ball boy is a better decision.

That’s why Perkins’ decision to challenge one of the NBA’s top defenders last week resulted in a hilarious and predictable outcome.

As Perkins attempted to go up with the ball, Davis, the star player for New Orleans, was there to stop him with his hand, simply sending the shot from whence it came.

Don’t feel too bad, Perk. You might not have the scoring or defensive skills of Davis, but you do have two eyebrows.