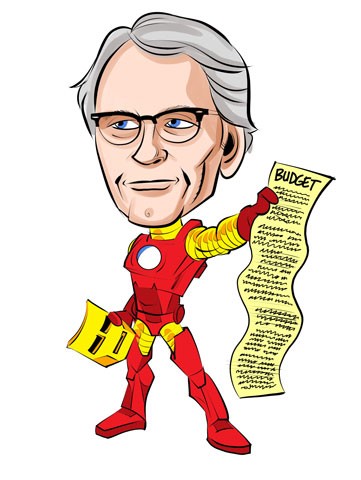 Like the Oklahoma business community’s version of The Avengers, several of the state’s wealthiest and most influential figures have joined together to announce their plan to combat our greatest super villain: a crippling budget shortfall.

David Rainbolt, executive chairman of BancFirst, and Larry Nichols, founder and chairman emeritus of Devon Energy, spoke before the media earlier this month at Oklahoma History Center, announcing a revenue-producing proposal from a new coalition called Step Up Oklahoma.

Among some other things, the group’s plan is to generate more money for the state and create a teacher pay raise through tax increases on cigarettes, the energy industry, motor fuels, wind-power generation and personal income. Their proposal also includes refundable tax credits and increased gaming revenue.

NonDoc quoted Rainbolt as saying the proposal was an attempt at bipartisanship, with every detail of the proposal being a tradeoff for something else.

“There was lots of compromise that went into this proposal,” he said. “So if you begin to pull out even the smallest piece of it, there’s going to be an opposite and equal reaction and the whole thing begins to fall apart. By definition, every single piece of this has been negotiated.”

Hmm … so the answer to solving this state’s budget woes is as sturdy as the average leaning Jenga tower. Sounds about right.