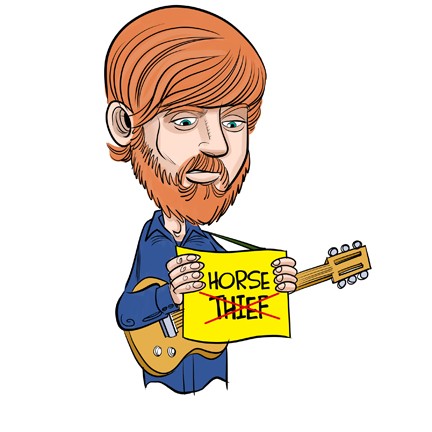 Apparently, Thieves are not immune to robbery.

In all fairness, the five-piece indie rock outfit and warmly adopted Okies by way of Denton, Texas, are known as nothing short of upstanding community members and popular contributors to the fabric of the Oklahoma City and national music scenes.

To the knowledge of Chicken-Fried News, and contrary to the quintet’s name, bandmates have not amassed a corral of kidnapped equines.

Sadly, Horse Thief is as impervious to criminal activity as any other band or citizen. While touring on the West Coast this December, the band had iPads, computers, passports and merch money stolen from its tour van while as it performed a gig inside a venue.

The band wrote on its subsequent GoFundMe page that the items were taken from the safe on board the vehicle during a tour stop in Portland, Oregon.

“We have been touring for years and this is something that is always in the back of our minds,” the band wrote. “Tonight it finally happened.”

Horse Thief set a $7,500 GoFundMe goal to replace the stolen items and make it safely back home to Oklahoma. The band wrote on the page that it hated asking for monetary help and was only doing it as a last resort.

According to numbers from the crowdfunding page, Horse Thief exceeded its goal by $50 in just six days thanks to donations from 167 family members, friends and fans. The page was shared more than 800 times on Facebook.

“Tour continues,” it wrote. “The support the past two days has been unreal.”