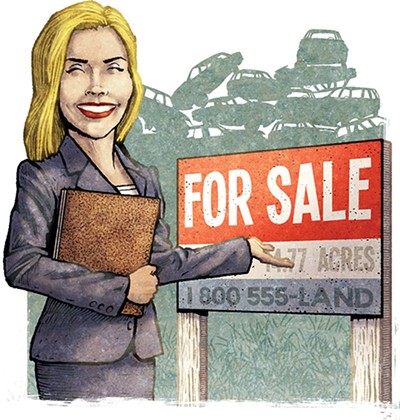 Oklahoma City has a long history with “out with the old and in with the new.” There was the wanton destruction of historic buildings during the height of Urban Renewal’s Pei Plan, and in current times, movements have been set in motion to save the Donnay Building and First “City Titty” Christian Church.

There hasn’t been the same outcry for the area formerly known as Hubcap Alley — the area connecting south downtown to Capitol Hill — as its land is being bought and repurposed from salvage yards and auto repair places into the second phase of Scissortail Park.

The next phase of the park brings with it the promise of increased development in the area. It is extending to Pull-A-Part Auto Parts Yard, which fronts the Oklahoma River at SW 15th Street and Santa Fe Avenue. According to The Oklahoman, the 14.77 acres on the Pull-A-Part lot is up for sale and the junkyard is moving to a new home on SE 25th Street.

The property backs up to the walking trail along the Oklahoma River and has views of downtown and the Boathouse District, making it the perfect place for future development. The broker for the property told The Oklahoman that the land can be converted into space for hotels, office, retail or mixed-use — so anything, really.

We look forward to the days of future generations sitting outside one of those mixed-use developments that has apartments above businesses on the ground floor. With a charcoal-flavored soft-serve that is great for getting Instagram likes, but not actually tasty, they motion off to the west.

“Over there is where my parents said John TV used to film. Now it’s a restaurant that only serves Brussels sprouts.”