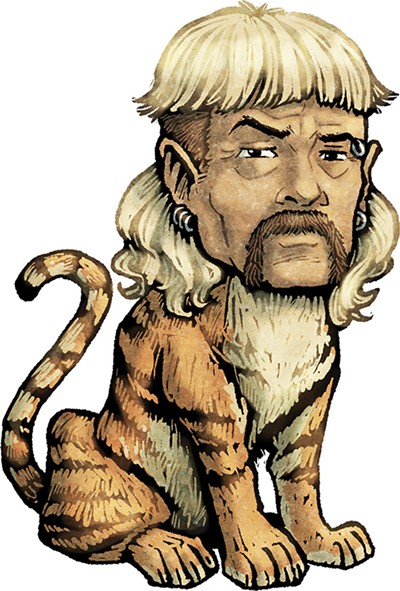 In the pantheon of weird Oklahoma news, no one has flown higher than Joseph Allen Maldonando-Passage — the man most everyone knows as Joe Exotic — the openly gay Libertarian presidential and gubernatorial candidate who founded the Wynnewood zoo famous for allowing guests to play with lion-tiger hybrid cubs.

Exotic’s unique persona has led to plenty of mentions in Chicken-Fried News over the years, but also plenty of national outlets like Last Week Tonight with John Oliver, the BBC and fans of two online shows shot from his own studio.

Like Icarus flying too close to the sun, all of the attention made Exotic think he was invincible and likely led to his conviction on 19 felony counts earlier this month, including two for murder-for-hire charges and killing five tigers with a shotgun.

“Here’s the problems with kings: They start to believe they are above the law,” assistant U.S. attorney Amanda Green said in her closing arguments about Exotic, according to The Oklahoman.

Exotic’s zoo, Greater Wynnewood Exotic Animal Park, was a longtime target for People for the Ethical Treatment of Animals (PETA) and other groups for its numerous animal rights violations. Lawsuits from Big Cat Rescue led to Exotic filing for bankruptcy and ultimately selling his zoo to Jeff Lowe while he remained its public face.

Exotic was convicted of attempting to hire people to kill Carole Baskin, Big Cat Rescue’s CEO, one of whom was an undercover FBI agent. At trial, Exotic accused Lowe of concocting the murder-for-hire plot, despite the fact he was on tape promising $10,000 to kill Baskin.

As Exotic and his trademark mullet are going behind bars for the next 20 years to life, we likely haven’t heard the last of the saga. The Oklahoman reports producers for Dateline NBC and the popular Netflix documentary Blackfish were among those taking notes at the trial.

At least all of the attention Exotic generates going forward won’t result in the killing of tiger cubs and the attempted murder of another person.