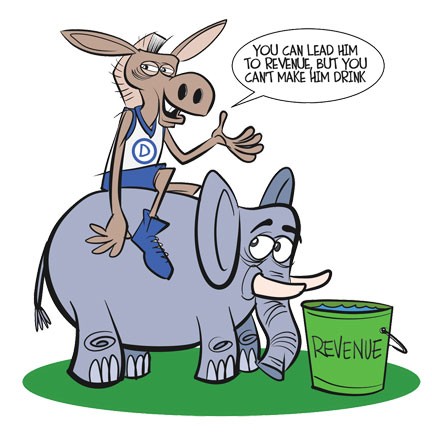 Days before lawmakers passed a $6.8 billion spending plan, which cuts most state agencies by about 5 percent and holds funding flat for core services in areas of education, health and human services and public safety, Gov. Mary Fallin called the plan “not an ideal budget.”

In a press statement, Fallin also stated the budget “does not address the structural budget challenges that [she has] been working to fix since [she] took office.”

Fallin’s warnings have fallen on deaf ears. A week after that spending plan was passed by lawmakers, there was a sign that some were coming around to that warning.

“We truly have a structural imbalance,” Osborn, R-Mustang, said at the Tulsa Regional Chamber legislative breakfast. “We have a revenue problem. We do not have a spending problem.”

Sen. Eddie Fields, R-Wynona, said, “I believe there are targeted areas where we could find more efficiencies. But we have state agencies that have been cut 40 or 50 percent over the past few years. There is a revenue problem.”

This must have been music to House Minority Leader Scott Inman’s ears.

“We’ve been saying for a while, ‘Hey, guys, we’ve got a revenue problem. We’ve been screaming it,” the Del City Democrat said.

We at Chicken-Fried News can only hope this means the 2018 Legislative Session will include Republicans and Democrats coming together to work on revenue-raising bills and fix those structural challenges. Maybe teachers will get a raise. Maybe classroom spending will increase. Maybe rural hospitals will stay open. Maybe the state can hire more troopers. Maybe the state’s VA centers will expand services. Maybe state college and university tuition will remain flat. Maybe the Department of Human Services can hire more caseworkers. Oh, the places Oklahoma could go!

Wait a second! Not all lawmakers are coming around to this revenue problem.