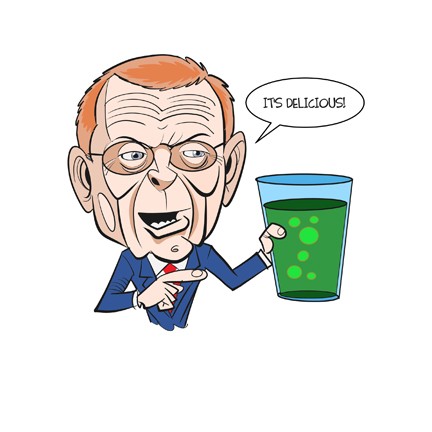 U.S. Sen. James Inhofe is at it again.

No, the Oklahoma lawmaker didn’t once again suggest climate change was false and claim to prove it by tossing a snowball while speaking on the Senate floor.

This time, the famous climate change denier, and chairman of the Senate Environment and Public Works Committee, falsely reports that a new study “confirms” “hydraulic fracturing has not impacted drinking water” in Pavillion, Wyoming, southeast of Yellowstone National Park.

FactCheck.org, a project of The Annenberg Public Policy Center, reported on Inhofe’s Nov. 10 remarks on its website this month.

“Ultimately, the facts have prevailed and the record is abundantly clear, with even the EPA affirming that ‘hydraulic fracturing activities have not led to widespread, systemic impacts to drinking water resources’ in its landmark water study,” Inhofe said.

As FactCheck.org pointed out, Inhofe’s remarks address an industry-funded Wyoming Department of Environmental Quality study and a June 2015 draft report from the United States Environmental Protection Agency that stated it “did not find evidence” that hydraulic fracturing has “led to widespread, systemic impacts to drinking water resources in the United States.”

The EPA advisory board challenged that draft report and no final report has been issued.

The facts aren’t crystal clear and no firm conclusions have been made; however, Inhofe is quick on the trigger to proclaim fracking has no impact on drinking water.

At Chicken-Fried News, we are happy to wait for the official and final report.