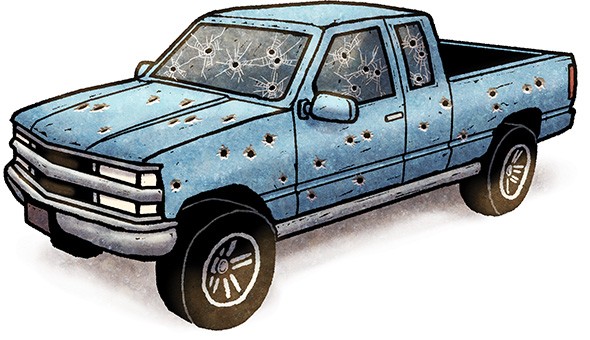 On April 26, Hugo police detectives attempting to apprehend a robbery suspect accused of taking $398 from a Pizza Hut opened fire on a pickup truck, wounding three children in the back seat.

“A bullet pierced the left frontal lobe of 4-year-old Asia’s brain,” The Associated Press (AP) reported. “Asia’s 5-year-old brother suffered a skull fracture and her 1-year-old sister was left with deep cuts on her face from gunfire or shattered window glass.”

Detectives Billy Jenkins and Chad Allen, wearing plainclothes and driving an undercover vehicle, reportedly fired at least 26 shots at the 1993 Chevrolet Silverado where the children — along with their 2-year-old brother, who was not hit — sat waiting for their mother, Olivia Hill, to pick up vegetables from the food bank. Following the shooting, Hugo police reported that Jenkins and Allen were firing at Hill’s friend William Devaughn Smith, 21, also in the vehicle at the time and a suspect in the Pizza Hut robbery that occurred two weeks before. Smith, police allege, put the vehicle into reverse as the officers approached, sideswiping Jenkins and causing him a “slight ankle sprain.” Smith, also wounded in the shooting, denies taking the vehicle out of park and said he was turned around helping the 1-year-old with a juice container when officers approached.

The detectives were put on paid leave during the investigation. Hill, meanwhile, had to ask friends and family for rides to visit her children in the Tulsa hospital 180 miles away because her truck was impounded as evidence. AP reported that all three children were flown in separate helicopters to Tulsa after the shooting and Hill, a home healthcare worker, received a nearly $75,000 invoice for just one of the rides. We should probably reiterate that this entire incident stems from the alleged aggravated robbery of $398 from a Pizza Hut. Sure, Pizza Hut is only tangentially related to this tragedy, but maybe if Pizza Hut’s name comes up enough in the conversation, Pizza Hut will at least give these kids some free Pizza Hut pizza.