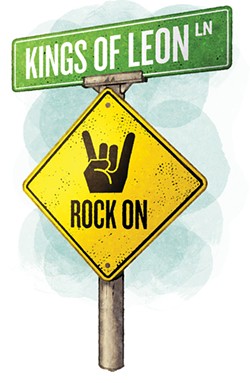 There very well might come a day in our future where you are hailing a rideshare app on Kings of Leon Lane in downtown Oklahoma City.

Mayor David Holt has submitted the proposal to honor the rock band, which opens Scissortail Park Sept. 27 with a free concert, by renaming a stretch of E. California Avenue, according to The Oklahoman.

This section of the street sits between two other celebrity-named thoroughfares that honor World Series hero Joe Carter and guitarist Charlie Christian and runs in front of Bricktown Events Center, where the band played two sold-out performances before returning to Oklahoma City in 2017 to play Chesapeake Energy Arena.

The days of guitar-based rock bands rising to the level of fame needed to play arenas are dwindling. Hip-hop and R&B have long passed the genre in popularity, and while many other rock bands are cloistered in subcategories once reserved for jazz fans, the Followills—brothers Caleb, Jared and Nathan and cousin Matthew—have retained their crossover appeal.

Their connection to Oklahoma was documented in the documentary Talihina Sky: The Story of Kings of Leon, which premiered at deadCenter Film Festival, and Caleb Followill discussed the brothers’ early years that included only have enough money for a single pair of pants.

Holt pointed out on Twitter that the band was quick to hold a benefit concert for relief efforts following the May 2013 tornadoes and Oklahoma City is the band’s adopted home. That is all well and good; Kings of Leon should be commended for its success and work it has done for the community, but is the city skipping hometown heroes Color Me Badd to honor them?