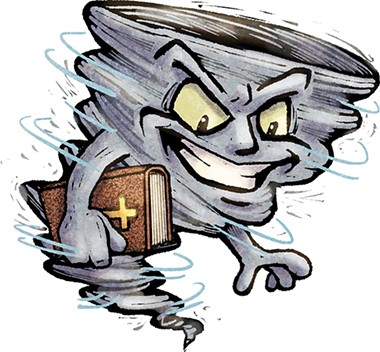 After a powerful tornado bypassed the Oklahoma panhandle town of Laverne on May 23, KFOR chief meteorologist Mike Morgan used strikingly unscientific language to describe the event.

"Truly a miracle," Morgan said. "Our prayers are answered for Laverne."

KFOR reported that the same storm destroyed at least three other houses in nearby communities. We hate to criticize anyone with a direct line to the Big Kahuna, especially during storm season, but for future reference, “Merciful God, please spare the town of Laverne (estimated population 1,380) and all the persons and property within its lawfully outlined city limits amen,” seems like a needlessly specific prayer if you ask us.

Maybe God is simply such a huge fan of Orange Is the New Black actress Laverne Cox they could not bring themselves to destroy anything bearing her name. Or, as less spiritually minded meteorologists have pointed out, an abnormally warm air mass over the Arctic Ocean and Alaska linked to human-caused climate change is exacerbating severe weather and creating an unusually harmful storm season.

"It makes all kinds of sense that the warm temperatures near Alaska, related to the low ice cover driven largely by global warming, must be boosting that [Alaskan] ridge, which in turn drives the downstream trough over the Western states that has caused late-season heavy rains in California, snow in Denver, and multiple pulses of extreme weather plowing through the Midwest," Woods Hole Research Center senior scientist Jennifer Francis told CBS News. “These are exactly the types of long-lived patterns we expect to see happen more often as the Arctic warms and melts rapidly."

Perhaps we should reconsider what we call an “act of God.”