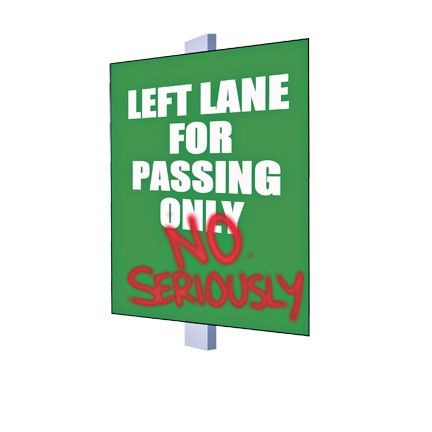 You’re not supposed to drive in the left lane!

We all know it’s just there to smile and look pretty and provide symmetry for those of us who might prefer that sort of thing.

But, really, it’s repeatedly stressed in driver education classes and tension-filled vehicles as teenagers and their parents try to ignore the fact that they’re flying 70 mph down the interstate in a death trap with an inexperienced driver at the helm.

March 7, the Oklahoma House of Representatives approved House Bill 2312, which would allow police and highway patrol officers to ticket drivers staying in the left lane.

That doesn’t mean you can’t use that lane at all.

Drivers could still use it to pass right-lane vehicles and “when traffic conditions or road configuration require them to use that lane to maintain safety,” according to NewsOK.com.

Oklahoma Highway Patrol legislative liaison Randy Rogers told NewsOK.com that HB 2312 isn’t meant to penalize people driving in the left lane when there’s no traffic around them; it aims to stop lane hogs who back up traffic and reduce the rate of accidents — and, logically, road rage.

So, basically, the only thing that would really change is the annoying person driving 60 mph in the left lane with 12 irritated drivers trailing behind would get a ticket if there was a police officer around to see them — and it would be easier for emergency vehicles to get to emergencies quicker rather than having to wait for people to merge and get out of their way.

However, HB 2312 would allow law enforcement to ticket offenders for their heinous lane hogging.

Before HB 2312 can become the law of the land, it needs to be approved by the Oklahoma Senate and signed by Gov. Mary Fallin.