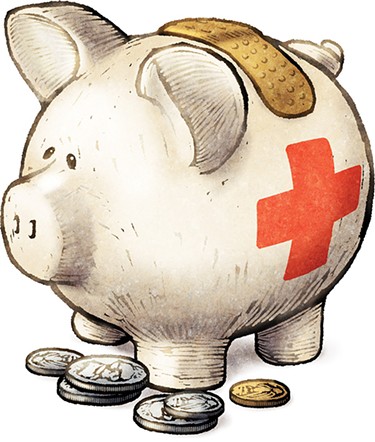 In 1990, Oklahoma ranked 32nd nationally in overall health, according to a report by America’s Health Rankings. Today, it is nearly at the bottom, coming in at 47th. In fact, obesity has increased 17 percent in the last six years alone. So what’s a reasonable way to help improve Oklahomans’ health? Oklahoma State Department of Health seems to think it’s reducing its budget by 1.5 percent.

In a budget meeting last week, Oklahoma Commissioner of Health Gary Cox asked for a $4.5 million reduction in funds, according to The Oklahoman’s Carmen Forman. Even our legislators were shocked.

“In my nine years here, this is the first agency that has come to a committee meeting I’ve been a part of and asked for less money,” said Sen. Frank Simpson.

Rep. Marcus McEntire called the proposal “counterintuitive” to reducing Oklahoma’s public health problems, which seems like a fair analysis when lowering the budget of a department whose slogan is “creating a state of health.”

“How does that square with the horrible health outcomes in our state, for the department of health to come and say, ‘Hey, we’ve got more money than we need’?” said Sen. Greg McCortney.

Cox, who was appointed by Gov. Kevin Stitt in September, told legislators he already found an estimated $9 million in savings. He’s looking to eliminate some administrative jobs and combine others.

“We want to get to be a lean organization,” he said, seemingly without catching the irony of saying that in a state ranked amongst the highest for adult obesity rates.

Cox maintains the department is on track to improve outcomes to get to “that top ten state,” which might be hard to do because in addition to obesity rates, we’re already a top 10 state for physical inactivity, diabetes, frequent mental distress and uninsured rates, among a host of other unhealthy outcomes.