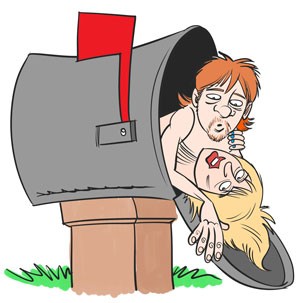 There once was a man in OKC And a woman he called his baby When they knew it was on They went out on the lawn Where everyone and their dogs could see.

That lively limerick came true on April 7, when Oklahoma City police arrested a man and woman on complaints of public drunkenness and public indecency.

They were having sex — in the front yard.

In fairness to Kenneth Dale Watson II, 35, and Petra Dawn Stephens, 31, they did have clothes on, according to police. So maybe it wasn’t actually sex, but with him on top of her, grinding his hips against her, in clear view of the street, it probably wasn’t an innocent-but-aggressive hula hoop mime-off.

The police said they had difficulty understanding the couple, as their speech was slurred and they had red, watery eyes.

It is spring in Oklahoma, so maybe it was just allergies.