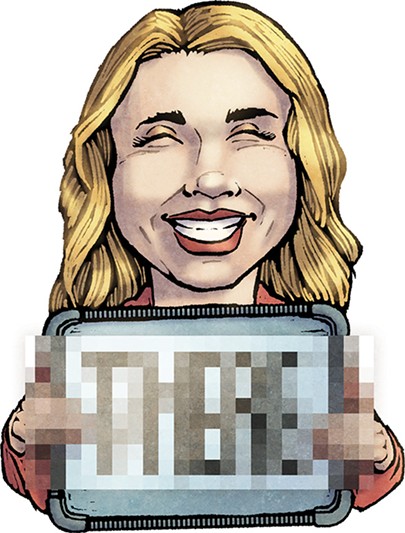 A Lawton news station is grappling with some controversy, and surprisingly enough, it has nothing to do with claims of “fake news.”

KSWO 7 meteorologist Mandy Bailey was playing a brainteaser the station calls Mind Mixer, a game in which their talent draws a puzzle for people to solve. Bailey wrote the word “There” with a noose between the first two letters. (The answer is “Hang in there” because the noose is inside the word “There.” Boom. Mind mixed.)

Of course, many people associate a noose with the lynching of  countless black Americans throughout our country’s history. Enough viewers expressed their disdain for the Mind Mixer and complained to KSWO, whose director must have felt the urgency to do something quick.

By 9 p.m. that same day, the station posted a Facebook update saying, “One of our employees at KSWO-TV displayed an image that was offensive and unacceptable. At KSWO, we do not tolerate behavior of any kind that depicts hatred, social injustice, racism or anti-Semitism. The employee responsible was terminated immediately.”

Now, the Chicken-Fried News staff personally knows very few white people who would comfortably draw a noose on television in the middle of Black History Month, but we digress. We doubt Bailey had any malicious intent with her drawing, but it does come across somewhat tone deaf. Still, firing the meteorologist over a cheesy game they force their talent to play at 6 in the morning seems like a bit much. Particularly when at least one other person at that station had to know, or should have known, what her puzzle was going to be.

We want to give the station the benefit of the doubt that Bailey was just the worst meteorologist already on the brink of being fired, but reaction from the public seems to disprove that. A Facebook group was created called “Boycott KSWO,” which already had more than 2,500 members two days after the incident happened. If you go on the station’s official Facebook page, you will see their attempts to keep calm and carry on are met with a flood of critical comments, demanding Bailey come back and saying she was their favorite part of the morning.