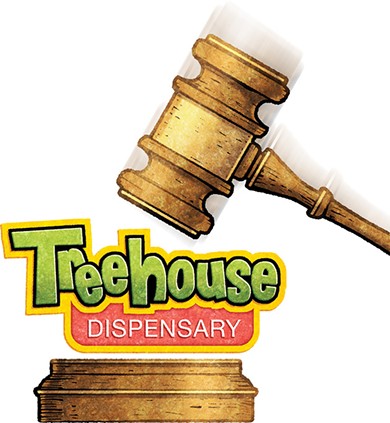 Canada and its people get a reputation for being nice, friendly, well-meaning people, but when you cross them, you better believe they’ll get what they deserve. Nelvana Enterprises, a Canadian entertainment corporation, did just that when it sued a local dispensary for copyright infringement.

The dispensary essentially copy-and-pasted the logo for Treehouse TV, Nelvana’s children television brand with shows like Peppa Pig and Max & Ruby. There’s no discernible difference between the two logos save for the fact that the local business added “Dispensary” under the main image. Everything else remained the same, almost like they Googled “Treehouse logo” and saved the first thing that appeared without a watermark. Treehouse Dispensary will have to pay more than $74,000 in legal fees and stop using the logo unless they want to unleash Peppa Pig’s rage. The dispensary has since started using a slightly altered logo, which still clearly draws inspiration from their first plagiarism attempt and keeps the name “Treehouse Dispensary” but is at least noticeably different.

When Nelvana initially filed the suit, they claimed the dispensary told them it would stop using the logo but refused to provide a deadline or follow through. At the time, Rob Durbin, the attorney representing Treehouse Dispensary, said the business “categorically denies that its logo infringes on any existing trademarks in the United States.” Since Nelvana is Toronto-based, Treehouse Dispensary probably thought they could get away with the equivalent of stealing a college essay from someone who goes to a different school. Unfortunately for the attempted copyright infringers, Treehouse TV also has the logo trademarked in the United States, which seems like something to check before categorically doing anything.

Durbin also initially said the dispensary would “vigorously defend” itself in the lawsuit, but they probably realized just how poorly that would play out because the dispensary actually “failed to plead or defend itself,” so the Canadian studio won in a default judgment. We’re typically not for corporations beating out small, local businesses, but when it comes to egregiously unethical actions like what the dispensary did, we can’t help but feel like justice was served in this case.