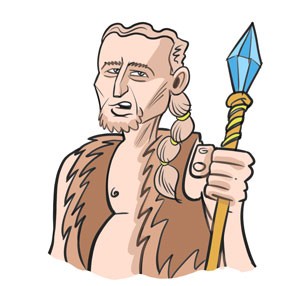 Sir John Michael isn’t your average lord — he doesn’t live in an old English manor house, nor does he wear expensive tailored suits from Savile Row. Actually, he lives in a yellow school bus and is more like a drug lord or maybe just a small-time gardener.

During a Feb. 10 interview with News9, he sported a fur vest, women’s leggings under his boxers and a less-than-perfect ponytail braid. Also, he carries a spear topped with some sort of (magic?) crystal; why wouldn’t he?

Michael told News9 that he spotted police helicopters circling the property several times before they arrived to investigate a report of a gunshot.

There never was a gunshot; Michael just got a little aggravated while working on his car and broke one of the windows, as you do.

When police confronted him, they told him to “put down the gun”; but Michael said he was just “twirling [his] ponytail.”

News9.com reported that police found 50 marijuana plants and a few bags of pot instead of the gun they were looking for.

Since Michael technically lives in the school bus and not in the home where police found the marijuana, his landlord, David Mason, was taken to jail and Michael was left to bail him out.