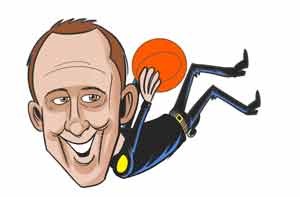 Some people find their calling early in life and some accidentally discover it in strange ways.

Oklahoma County Sheriff’s Deputy Erik Gransberg recently gained a bit of celebrity after a video went viral. In it, he’s shown assisting a performer in a slam-dunk show at Edmond Memorial High School for Swine Week. Unless you have relatives or friends with children in Edmond, you probably have no idea what Swine Week is, and that’s perfectly understandable. It’s a yearly series of events in which students raise thousands of dollars for charity.

Gransberg ran from the other end of the court, jumped off a trampoline, flailed his legs around and bounced the basketball off the backboard to the performer’s waiting hands so he could dunk it.

He decided that assist was just a warm-up and wowed the crowd with a flip off the trampoline before again handing off the ball.

The video appeared on Sporting News, Bleacher Report and The Daily Mail and was even scheduled to appear on ESPN, KOCO.com reported.

He does, however, have one request.

“I want Ellen. I love Ellen. I think she’s great. She’s all about love. So, Ellen, if you’re listening, I’m available,” he told KOCO.com.

Gransberg’s calling is to be a great cop, help other people make awesome slam dunks, do flips and talk to Ellen.