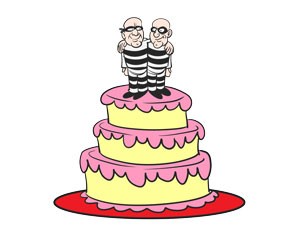 In a move that probably shocked no one and enraged many, Oklahoma’s Department of Corrections (OKDOC) decided that no prison inmates may wed until the U.S. Supreme Court issues its decision about same-sex marriage across the country.

U.S. inmates have been able to marry since 1987, when a Supreme Court decision legalized it. In October, a ruling by the same court made it legal for same-sex couples to be hitched.

The Supreme Court is reviewing cases from several states, and a ruling is expected sometime this month.

According to freedomtomarry.org, “Since June 2013, there have been 65 rulings in favor of marriage for same-sex couples.” Thirteen states do not legally recognize same-sex marriages.

While there is no court-issued national moratorium prohibiting same-sex inmate weddings pending the ruling, OKDOC apparently decided it just couldn’t cope with the drama and hardship of allowing marriages of any kind while it waited.

KRMG.com quoted OKDOC spokeswoman Terri Watkins: “If same-sex marriages are ruled legal, then the policy will need to be changed.”