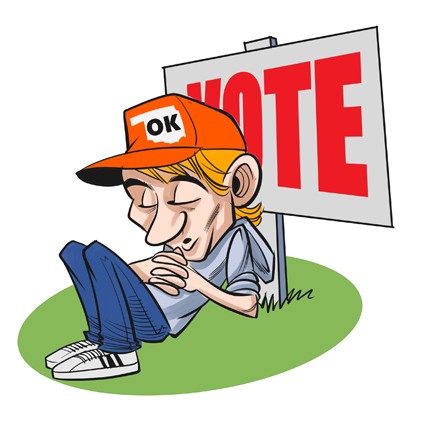 That’s the thought we at Chicken-Fried News had when we read the recent study from personal finance website WalletHub.

In the study 2016’s Most & Least Politically Engaged States, Oklahoma earned the lowest ranking at No. 51. Yup, we are the least politically engaged state, based on factors like number of registered voters, voter turnout and contributions to political campaigns.

Seriously, we are scratching our heads. Why is there such a lack of political engagement among Oklahomans?

The Chicken-Fried Newsdesk staff put our heads together (nobody was injured) and came up with five possible reasons Oklahomans don’t vote:

Emergency certified teachers forgot to teach the lesson about civic participation being a key ingredient of a well-functioning democracy.

Polling stations are impossible to find, as they are located in churches, schools and community centers. Why can’t election workers set up at Sonic Drive-In locations during happy hour?!

We have developed allergic reactions to adhesive and can’t be within so many feet of stickers. Think peanut allergy, but worse.

The state’s top leaders, like country singers Blake Shelton, Toby Keith and Wanda Jackson, rarely make trips to polling stations. Don’t believe us? Check it out for yourself at BadVoter.org.

Someone went around the country grousing that elections are rigged.