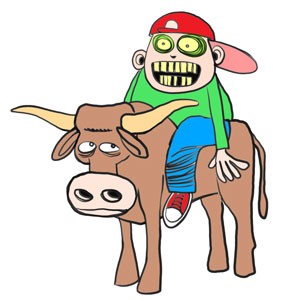 Grab your six-shooters, don your most rugged pair of dungarees and saddle up your horse.

One of the Wild West’s most infamous crimes — cattle rustling — has made a comeback. At up to $3,000 a head, livestock theft cost state ranchers about $4.5 million dollars last year alone, reported the Oklahoma Department of Agriculture.

Driving the trend are meth addicts, who sell the animals for drug money.

It’s hard to walk off with a cow. We imagine that throwing a bovine over one’s shoulder and sauntering off a farm all nondescript-like and not being noticed would be quite a feat. Maybe invisible cloaks are involved.

A report from Reuters said Oklahoma law enforcement busted a five-person cattle-rustling ring and recently arrested two suspects. The five ranged in age from 12 to 22 and are believed to have made out with tens of thousands of dollars worth of bovine booty in just several months.

“Cattle rustling has been around since Moby Dick was a minnow, but the price of cattle has doubled and tripled in the past few years, and theft is on the rise,” Jerry Flowers, chief agent of investigations for the Oklahoma Department of Agriculture, told Reuters. “We found the presence of meth to be more and more common with people who steal livestock. It’s easy, quick money.”

Prison sentences for such crimes can be up to 10 years per animal stolen, officials told Reuters.