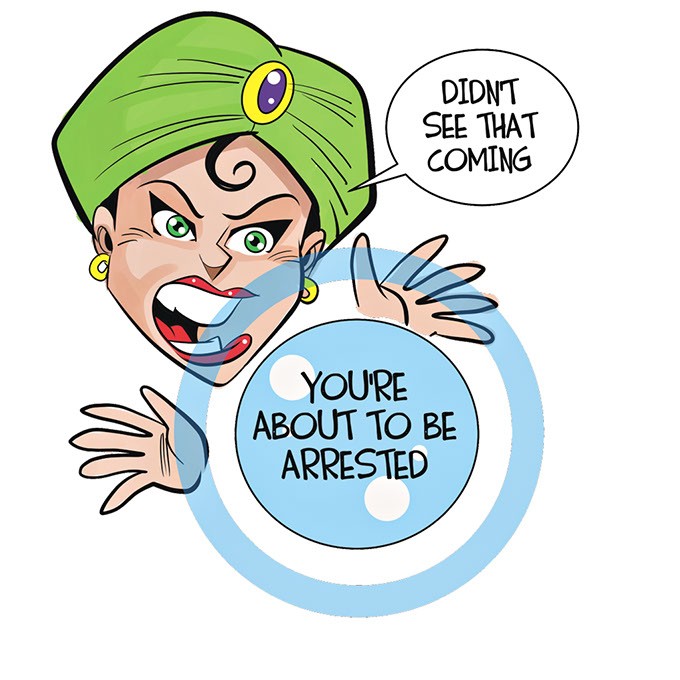 Well, who saw this one coming?

Didn’t know that was illegal? You would not be the only one. Oklahoma City police Master Sgt. Gary Knight told NewsOK.com that the charge is an “exceedingly rare thing” but has nonetheless been illegal in the state since 1915.

Police are unlikely to investigate such claims unless they receive complaints. Despite its rarity, fortune-telling for a fee is no small violation. Marks might see some jail time in her tealeaves if convicted.

The obscurity of the charge led Marks’ defense attorney to claim targeting, as other self-proclaimed psychics and fortune-tellers operate in the state without problems. Stephen Dillard-Carroll, owner of Oklahoma City’s The Traveling Tarot, told NewsOK his nine-year-old business has encountered no legal trouble.

“There’s a reason why this particular law is not really enforced,” he said. “By and large, the psychic business is a reputable business.”

Alas, a look into the Chicken-Fried News crystal ball reveals Marks has a murky past. Ohio news reports show that in the 1990s, she conned several fortune-telling clients out of as much as a cumulative $1 million.

In August, an undercover OKC police officer paid $60 for a six-minute session with Marks. Other agents were pressed to pay as much as $125 for additional meetings and “aura cleanses” that promised to bring them true happiness.