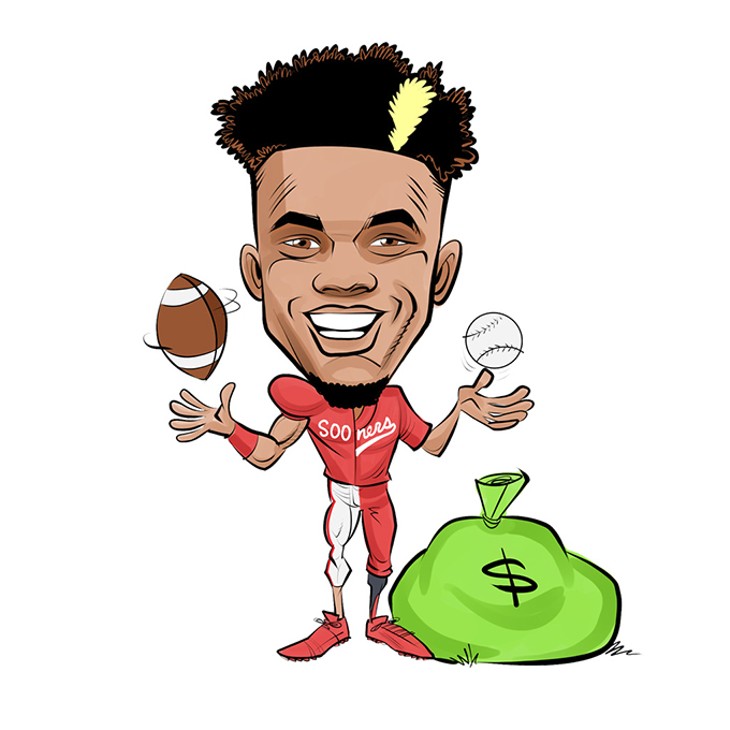 There comes a time in every young man’s life when he faces a familiar choice: become a millionaire first-round baseball prospect or play quarterback for one of college football’s most storied programs.

Oh, we neglected to mention that by “every young man,” what we really mean is, “pretty much only Kyler Murray.” Earlier this month, the 20-year-old University of Oklahoma (OU) sophomore was selected ninth overall in the 2018 Major League Baseball draft by the Oakland Athletics.

Murray is clearly a fantastic baseball outfielder, but he was a high-school football phenom in Texas just a few years ago. Highly recruited, he chose to attend Texas A&M before transferring to OU after one year.

Last season he served as OU’s backup quarterback. Some fans will likely remember him as the guy who had a 65-yard run and led an OU touchdown drive in just two plays in the one series former starter Baker Mayfield was suspended for after his notorious Kansas crotch grab.

Most people expect Murray to sign a contract with Oakland sometime this summer and pick up a signing bonus in the neighborhood of $5 million. Then he will play quarterback in the fall and go pro in baseball after the season is done.

It should be noted that OU football coach Lincoln Riley makes only $3.1 million per year. A college kid who makes $2 million more than his 34-year-old boss? Nope; no way that could ever lead to confusion on the team’s power dynamic.

If Riley has any concerns about the situation, he’s not speaking about them publicly.

“We’re excited to have [Murray] here with us for this upcoming football season,” Riley told The Norman Transcript. “We’re looking forward to getting him back around our team this summer, and he’s excited to get into workouts and help us continue to pursue another championship. We’re also equally excited for his opportunity with Major League Baseball and being the ninth pick in the draft. It’s a great honor for him, and he’s going to have some great options going forward.”

If the other sport Murray was passionate about was something like pillow fighting or tiddlywinks, his choice wouldn’t be such a big deal. But in case our fine Chicken-Fried News readers have never noticed, football tends to be a dangerous sport, particularly for quarterbacks. A serious injury could risk derailing his a promising baseball career that has the potential to generate him many, many more millions in the future.

Murray is not projected to have nearly as impactful of a future in pro football, so baseball might be his best and only shot at a pro career. But a $5 million signing bonus, if managed properly, could have one set for life. Maybe Murray’s career choice is, in fact, none of our business.