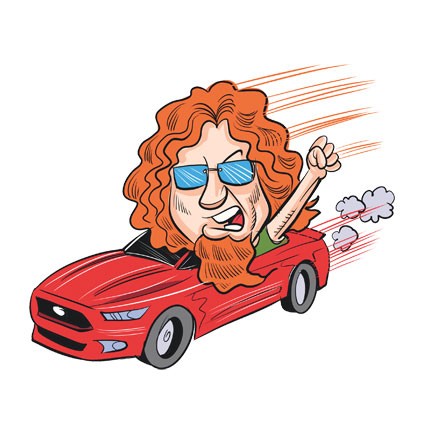 It might be time to institute an “I Can’t Drive 55” Sammy Hagar rule for Hector Fraire Jr. after Oklahoma Highway Patrol troopers said they caught the 19-year-old man driving 208 mph on the Kilpatrick Turnpike.

Troopers said they tried to pull the young man’s 2011 Ford Mustang over for going 85 mph in a 70 mph zone in Oklahoma City when the car tried to make a very hasty getaway.

In an attempt to evade capture during the early morning chase, officers said Fraire turned off his headlights and brake lights, because who would want to be able to see while they’re driving like the Sprint Cup is on the line?

The suspect might have gotten away had it not been for a Canadian County Sheriff’s deputy who eyed a vehicle matching the Mustang’s description near Northwest Expressway and Sara Road, NewsOn6.com reported.

A trooper finally made the stop at red light at Northwest Expressway and Highway 3, where Fraire reportedly pulled over and dropped his keys out the window, according to NewsOn6.com.

Website TheDrive.com reported that Fraire’s speed was “ridiculous” and that, if accurate, “this car must’ve had some serious mods.”

The 200 mph barrier was only broken in NASCAR in 2014 by driver Tony Stewart during a qualifying lap at Texas Motor Speedway.