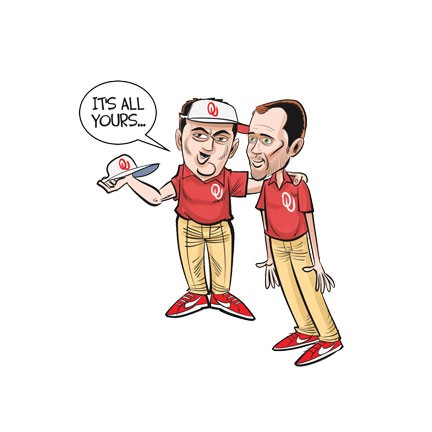 Here’s a sentence no one around Chicken-Fried News’ hallowed halls expected to be writing anytime soon: The University of Oklahoma (OU) has a new head football coach. Oh, and he’s just 33 years old.

If you didn’t catch the news as soon as it broke on the afternoon of June 7, chances are someone soon texted, tweeted, emailed, faxed or telegraphed you the shocking announcement that former head coach Bob Stoops is retiring from the school after 18 seasons.

The shocking retirement left many to speculate. Why leave like this just a few months away from the football season? Was Stoops’ health in decline? Was the football program facing some kind of unknown investigation or penalty? Or perhaps Stoops, like seemingly everyone else these days, is hiding secret ties to Russia.

The coach released a public statement later that day clarifying his decision, saying that he is in good health and merely felt the time was right to move on.

As noted in Chicken-Fried News a few weeks ago, Stoops recently bought a house in Chicago. The coach had said publicly on several occasions that he did not want to coach forever. Apparently, not that many people believed him.

“The Bible says, ‘To everything there is a season, and a time to every purpose under the heaven,’” Stoops’ statement read. “I’m grateful for this season of my life, and feel I’ve fulfilled my purpose here at OU as its head football coach.”

Stoops will continue to serve the university as a special assistant to athletic director Joe Castiglione.

Stepping into the shoes of the school’s winningest coach of all time is former offensive coordinator Lincoln Riley. At 33, he is the youngest head coach in the Big 12 conference.

Riley might not be old enough to be president of the United States (the age requirement is 35), but a legion of football faithful now look to him to lead Sooner Nation while hoping the only numbers that matter are yards, touchdowns and win totals.