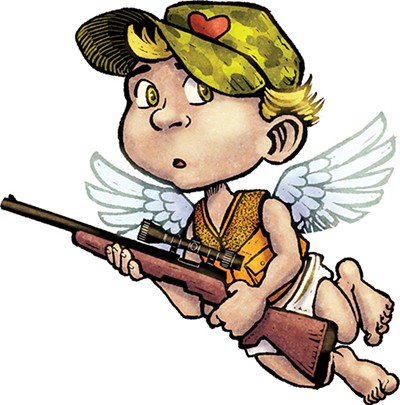 An Oklahoma woman looking for a love connection got a hefty fine instead and didn’t even land a date.

The woman, whose identity is being protected by Oklahoma Department of Wildlife Conservation Game Wardens, started chatting with 24-year-old Cannon Harrison on Bumble, a location-based dating app where only women can initiate a conversation.

They exchanged pleasantries, but almost immediately, she humble-bragged about shooting a “bigo buck.”

“Hell yeah, get ’em with a bow?” Harrison asked, knowing rifle season was over.

“Well we don’t need to talk about that,” she wrote back.

She confessed to spotlighting when asked and even sent pictures at Harrison’s request. Spotlighting is an illegal, immoral and cowardly trick where hunters shine a bright light on an animal to essentially stun it while they kill it.

Well, as it turns out, Harrison is a McIntosh County game warden and the woman had just admitted to breaking at least two laws. At first, Harrison thought it was a prank. His Bumble profile doesn’t list his job as a game warden (we’re not sure why either), but the woman basically sent him a confession, a general location and a picture of herself crouched next to the dead deer while holding its antlers.

“You can’t just ignore a broken law that falls right in your lap but was kind of a bummer,” he told Tulsa World. “She said it was her first deer ever, too.”

Harrison jumped into action. With a name, a picture and a sense of where she lived, he figured out who the woman was. Game wardens showed up at her place the next morning and gave her and an accomplice a “bigo” $2,400 fine. She pleaded guilty to hunting deer out of season and possession of an illegally taken animal. No charges were made for wasting meat and spotlighting, though.

She wasn't even arrested, but if we had to guess, she probably won't be bragging about her kills on Bumble again anytime soon. Or maybe she'll opt for Tinder.