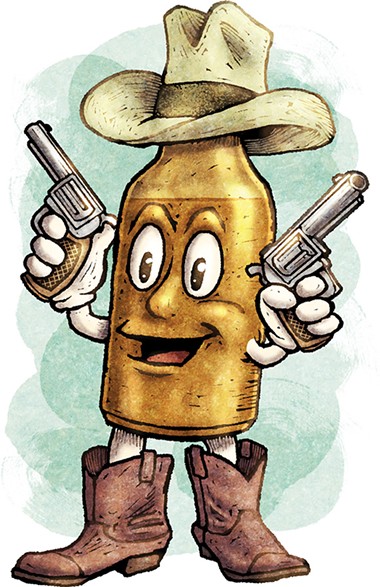 Oklahoma Republicans have spent much of the 2020 session pandering to pro-gun groups and idolizing guns almost more than they idolize president Donald Trump. Almost.

Despite passing permitless carry last session, making it the first bill Gov. Kevin Stitt signed into law, Republicans at the capitol continue pushing to see guns everywhere they can think of. Well, not at the State Capitol because that would just be too dangerous, but definitely at family restaurants. It’s not like anyone’s ever had an avoidable mishap, like say, forgetting their gun in the bathroom of a place that doesn’t even allow guns in the first place only for a toddler to find it. (That totally happened, by the way; we’re just coping with sarcasm.)

HB1111, legislation that would allow people carrying guns in the bar areas of restaurants as long as they are not drinking alcohol passed the Oklahoma House of Representatives last week a few days before Moms Demand Action held their advocacy day — almost like lawmakers didn’t want to hear from a group of constituents advocating for common-sense gun legislation. Critics say enforcement of the bill would be difficult and it would ultimately just make it easier to mix guns and alcohol.

“If a person without a gun were to order drinks and give one to a buddy with a gun — what is there to prevent that from happening?” asked Rep. Ben Loring, D-Miami.

Rep. Kevin West, R-Moore, who sponsored anti-abortion bills because “it’s definitely important for saving the lives of unborn children” but doesn’t seem to care about born children, said it would be more of a “self-policing” matter — not something we like our state representatives to tell the kind of people who can’t leave the house without their guns.

Rep. J.J. Humphrey, R-Lane, who also sponsored the anti-abortion bill (surprise!) citing “sanctity of life,” said having an armed person in your group on a night of drinking was just like having a designated driver — a “designated gunslinger” as Rep. Regina Goodwin, D-Tulsa, put it. Except instead of your sober friend taking you home so you don’t hurt anyone driving drunk, they would, you know, presumably threaten someone else’s sanctity of life to … make sure you get home safely?

We’re really not sure what these Republicans are envisioning beyond a pat on the back by the NRA, which is still going through a leadership crisis and being investigated. Rep. West said people are only getting worked up about the bill because it relates to guns and isn’t “the Wild Wild West scenarios we’ve been hearing.” Totally. The fact that a group of gun extremists dressed in full tactical gear showed up at the capitol saying, “Guns are our religion,” isn’t wild at all. (It definitely is.)