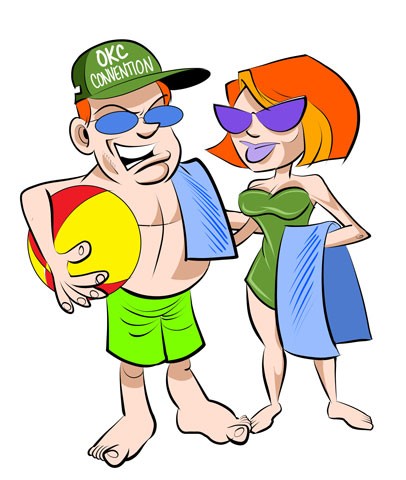 In early January, when architectural renderings of Oklahoma City’s Omni Hotel were released, it deserved a click-bait headline like, “OKC’s Omni will be like nothing you’ve ever seen before.”

Here at Chicken-Fried News, we haven’t found any local media utilizing the headline; however, after viewing the hotel designs by Rule Joy Trammell + Rubio, we think the catchphrase summarizes it well.

After all, has OKC ever had a rooftop pool terrace that resembles what one finds on the pages of Travel + Leisure magazine?

What about the Omni incorporating restaurants, a sports bar, a coffeehouse and retail shops on its lower three floors? Such a glamorous setup reminds us of Las Vegas hotels without the casino games.

Oh, and we can’t forget to tell you Oklahoma City’s Omni will be a 605-room AAA Four Diamond hotel serving the new MAPS 3 Convention Center.

At this point in reading, we imagine readers saying, “Hold up a minute. This hotel is for visiting convention folks, but it sounds like a leisure destination for wealthy people.”

Truth be told, the hotel will serve both convention and leisure traffic. According to a press release from The Alliance for Economic Development of Oklahoma City, the Omni is expected to deliver an economic impact of more than $137 million per year. Bring it, travelers!

The alliance, which partners with the city on economic development deals, worked with Omni to strike the convention center “headquarters” hotel deal with OKC. The city committed $84.5 million in financing for the project, with Omni investing $150.1 million.

“The convention center hotel provides the space we need to compete for large conventions that often require a room block of 500 or more,” Cathy O’Connor, alliance president and CEO, stated in a press release. “But I’m also pleased with how the hotel offers amenities and features that Oklahoma City residents will enjoy.”

Mark your calendars for the Omni’s completion in late 2020.