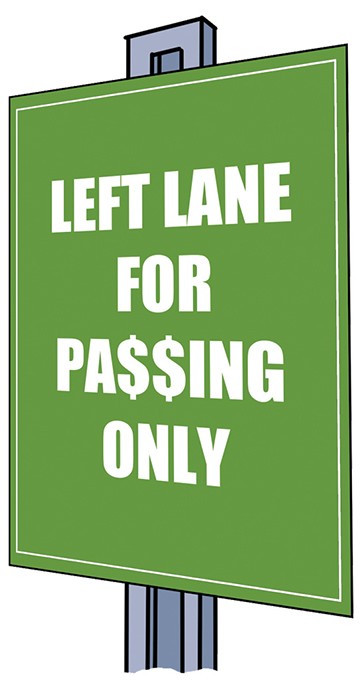 We at Chicken-Fried News tried warning you that you won’t be able to cruise in the left lane on the Interstate in Oklahoma anymore — not after a new state law went into effect at the end of 2017 that forbids motorists from traveling long distances in the left lane of a four-lane highway.

According to records obtained by The Oklahoman, 60 people received tickets for violating the left lane law in the first three months it was enacted.

Don’t be like Justin Fields, who was profiled in an Oklahoman story for being in violation of the left lane law 10 days after it went into effect. An Oklahoma Highway Patrol officer followed Fields in the left lane of Interstate 40 going eastbound for quite some time and then turned on his lights when Fields signaled to the right lane.

Staying in the left lane too long was the least of Fields’ problems. He was also cited for driving under the influence and having an open container.

“I wasn’t even aware of [the law],” Fields told The Oklahoman. “That was called the fast lane, as far as I knew, and right lane was for the slower drivers.”

The left lane violation carries a fine up to $235.

Carter County, which includes much of the Interstate 35 stretch between Davis and CFN fave rave Lake Murray State Park, issued the most left lane tickets (14) of any county, according to The Oklahoman.

A similar law has been on the books in Texas for years and is designed to cut down on traffic, which is created by drivers unnecessarily changing lanes. Only go into the left lane for passing, to allow merging or when emergency vehicles are on the side of the road.

Just don’t be as clueless as Mr. Fields.