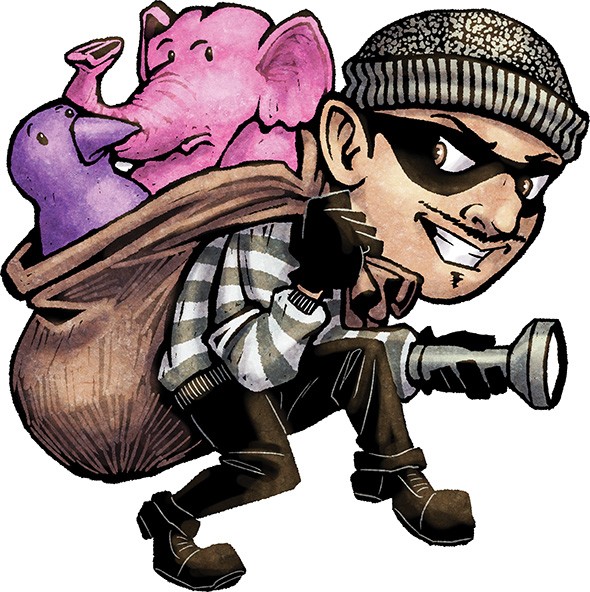 Two iconic and colorful mascots were stolen from Oklahoma City businesses in the span of a week, and the crack team here at Chicken-Fried News thinks it might be more than a coincidence.

First, in the early morning hours of 2019, a person (who had likely had too many champagne flutes to ring in the New Year) walked out of Mary Eddy’s Kitchen x Lounge at 21c Museum Hotel with its purple penguin. Each hotel in the 21c chain has its own version of the penguin, according to a spokesman from the company.

Police released surveillance footage of a man in a North Face pullover lugging the penguin, which was almost as big as he was, out of the hotel, which probably made for a weird surprise in his bed the next morning.

Clearer heads must have prevailed because the penguin was returned Jan. 3, and the hotel did not press charges after the penguin was unscathed, at least physically. CFN is surprised the thief doesn’t have to foot the bill for the penguin’s therapy.

The second mascot to disappear was Empire Slice House’s pink elephant, Ellie. The elephant has become a fixture for the restaurant as it has gained national acclaim and moved into a larger 16th Street Plaza District location, but she disappeared early last week just before midnight.

City code doesn’t allow for Ellie to be fixed to the ground, so staff usually brings her inside before Empire Slice closes at 2 a.m. As of publication, the elephant was still at large. Surveillance footage didn’t lead to many clues, but have they questioned the perpetrator of the penguin heist?

I guess we’ll know if there is a crime ring dedicated to stealing colorful animal mascots if the bear from Oso on Paseo or any of the buffalo statues go missing.