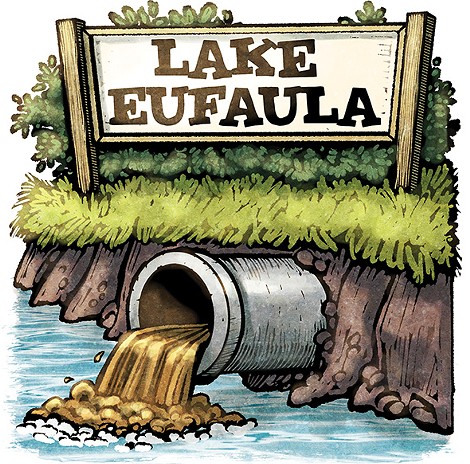 According to no less an authority than urbandictionary.com user The Mad Shitter, an “upper decker” is “the act of defecating in the upper tank of the toilet” so that “when the next poor unsuspecting person flushes the toilet they get a bowl of [excrement].” The town of Carlton Landing has been pulling a large-scale variation on this baseball-themed party prank, dumping millions of gallons of untreated water from its sewage lagoons into Lake Eufaula, according to a report released last month by news website The Frontier.

According to the report, “Carlton Landing had been warned for years about problems with storm water flowing into its sewage system that caused its lagoons to rapidly fill, unlined lagoons and torn liners in lagoons that allowed water to seep from the system, and ‘bypasses’ or discharges from the lagoon system.”

After repeated warnings about insufficiencies in the lagoon system, Oklahoma Department of Environmental Quality issued a consent order to Carlton Landing’s water district last year. The order required the district to make improvements to the system’s lagoon liners — which were either missing or damaged, allowing the stored wastewater to seep into the ground — and to submit plans for a new treatment facility capable of adequately storing and treating the wastewater created by the residents of Carlton Landing’s approximately 260 homes. The terms of the order, according to The Frontier, were agreed upon in February 2018, but before they were scheduled to go into effect less than two months later, “the Carlton Landing Rural Water District intentionally pumped approximately 3 million gallons of water out of its sewage lagoons and into Lake Eufaula” not far from where “the Longtown community’s Pittsburg County Rural Water District #1 draws drinking water.” Among the district’s customers is Carlton Landing’s own water district.

Whoops! That’s like upper decker-ing the office water cooler then forgetting about it and having a glass.