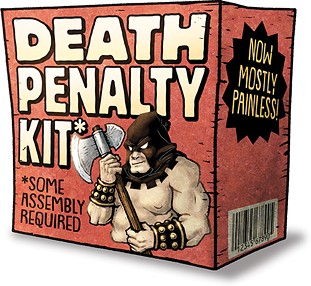 Oklahoma is still struggling with killing its people — quickly and intentionally, at least.

If you recall the last two executions in Oklahoma, which were definitely cruel and highly unusual, you might remember that the lethal injections did not go according to plan. Clayton Lockett and Charles Warner were supposed to go numb and become paralyzed, and then their hearts were supposed to stop. But the injection was botched and they felt pain. "My body is on fire" were Warner's last words.

That was almost five years ago. The state of Oklahoma has not executed anybody since, partly because they could not get drugs for lethal injections. So officials decided to switch to nitrogen gas for their executions, but they are still having issues. The Frontier’s Dylan Goforth summed up Oklahoma’s issue nicely, reporting, “When it comes to the death penalty, Oklahoma is Sisyphus pushing a rock up a steep hill.”

Oklahoma attorney general Mike Hunter said at a recent meeting that "the challenge is getting the equipment that we need, and we're at a point where we're probably going to look for an in-state manufacturer," according to The Frontier.  Despite this, Hunter hopes to resume executions in 2020.

Last March, when Hunter announced the new execution method, he called it "the safest, the best and the most effective method available," even though little scientific evidence exists to back it up and veterinarians refuse to use it on animals.

“No one has done this before, so whatever the state comes up with, obviously it’s going to be untried and no one will know or even can know how it is going to work or if it’s going to work," Dale Baich, an attorney representing Oklahoma death row prisoners, told The Frontier.

So let us get this straight. Oklahoma plans to start using an unproven method of execution — that, again, even vets do not recommend for cats and dogs — by next year? Yikes! Maybe it's a good thing many of Oklahoma's elected leaders treat deadlines like general suggestions instead of, well, deadlines.