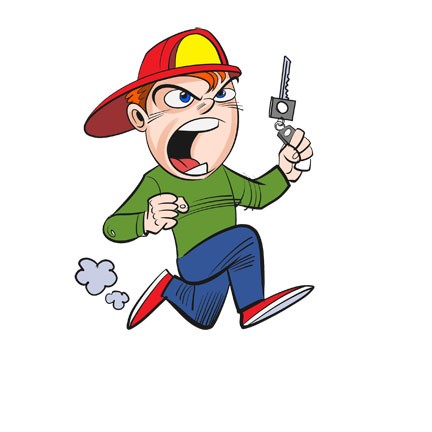 Joyrides are usually made in your parents’ car in the dead of night while they’re fast asleep. Or they’re done in a police car found sitting all alone with the keys in it, just begging you — a young, fearless teenager — to take it for a spin.

A Stratford man hanging around the Oklahoma Heart Hospital at 5200 E. Interstate 240 Service Road dared to be different. One armchair enthusiast dauntlessly entered the race but did not qualify or finish. NewsOK.com and KFOR.com reported that police believe 56-year-old Michael Bagby was attempting to steal Oklahoma City Fire Department’s Brush Pumper 13, which was parked by the hospital, Jan. 3.

Bagby barely had an opportunity to push the pedal to the metal before he joyrode the commandeered wildfire-fighting truck straight into a ditch. He also missed his chance to expropriate the tow truck called to pull out the damaged vehicle after Bagby was arrested.

KFOR.com reported that the driver assigned to the truck was inside the hospital at the time of the attempted theft.

Hopefully, Bagby learned his lesson and realized that his joyriding days were over long ago and he isn’t really qualified to drive fire trucks anyway.