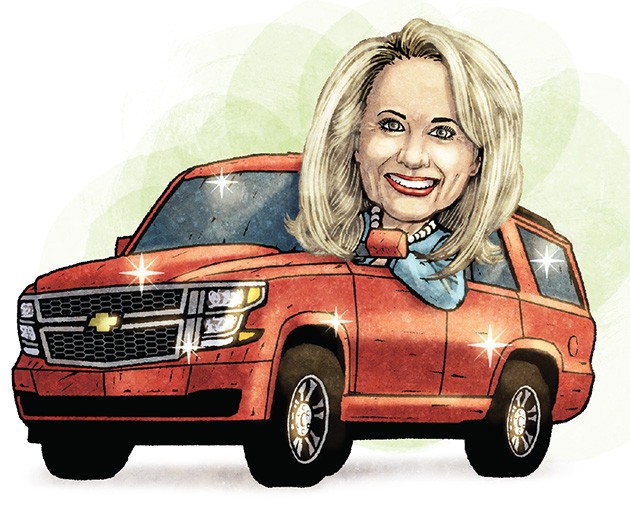 Who knew picking the color of a car could be such a big deal.

Megan Simpson, former Oklahoma Department of Public Safety assistant commissioner, was tasked with just that earlier this year, so she picked bright Victory Red for her new state-provided Chevy Tahoe.

It wasn’t. In fact, it was probably the worst choice the self-proclaimed irregular No. 2 could have made.

The state paid more than $35,000 to the dealer and spent about $11,000 more to equip it with a siren, a “ghost” light, a police radio, a gun vault and leather seats, according to The Oklahoman. Keep in mind that Simpson is an attorney, not a law enforcement officer. But why would she not need a siren and a gun vault, right?

“It’s so pretty!!!!” Simpson wrote in an email to her fleet director.

Unfortunately for her, Simpson only got to drive the pretty!!!! Tahoe for a few weeks before being fired — get this — on Labor Day along with the commissioner and another employee.

Now John Scully, the new commissioner, is stuck with what he considers an embarrassment for the department. He said they were going to try to sell it to a fire department or another agency that can afford to buy it, but the process has been slow. So Scully has ordered for it to be sold at an online auction to try to get rid of it as soon as possible.

“I don’t want that in the fleet any longer,” he told The Oklahoman. “We just need to move on.”

But the three employees that were let go don’t want to move on just yet. They have hired an attorney to file a wrongful termination lawsuit, which should go well for no one involved.