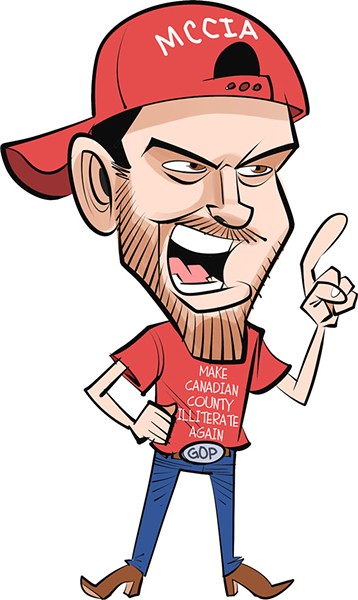 Oklahoma has once again found itself in the national spotlight after a letter from Canadian County Republican Party chairman Andrew Lopez to newly elected Republican lawmakers was leaked to the public in late November, exposing the overweening bonkers mentality of anti-education extremists for all that it is.

Lopez begins his welcome letter by warmly letting the newly elected leaders know that they have been chosen by God to represent their constituents, which is funny because we just went to the polls en masse a month ago and none of the Chicken-Fried News team members ran into God in line.

A paragraph later, Lopez’s tone turns from friendly to damning with the following proclamation:

“If you are a teacher who has entered the Legislature with the sole purpose of increasing funding for education, your representation of your district is compromised by your claim to be a representative of a special interest group.”

“A better pathway,” Lopez states in his letter, “would be to abolish public education … and allow the free market to determine pay and funding.”

If some rando clickservative nutcracker was rambling off on social media about how public schools were really child clone warehouses in which impressionable minds are fed the evil propaganda of evolution and, God forbid, space exploration, then we at CFN might let this one go without a fight. But when an official who represents the Republican Party reveals these sentiments on official stationery, it’s alarming to say the least, and we’re not the only ones who think so. Local news outlets reported on Lopez’s letter and national media outlets like The Washington Times, The Washington Post and the U.S. News & World Report all published articles regarding it as well.

When asked whether Pollard agrees with Lopez’s’ beliefs, she recently told reporters that she does not. However, commentary Pollard left on one of her social media sites a few years ago all but gives Lopez a fist bump.

“Just an idea,” Pollard wrote on Facebook in 2014. “Let’s do away with public schools and put the responsibility of raising our children back on the family. Mothers can stay home with their children … send the boys to help daddy … and let the girls help mama in the kitchen cook for the family that sits together at the dinner table.”

Beyond the blatant sexism, she makes reference to the Bible while advocating for the deconstruction of the state’s public schools — the same card Lopez deals in his recent letter.

However, we at CFN have a subtle feeling that Jesus would likely not be in favor of abolishing education for the young, but this feels more like an Ayn Rand thing, to be honest.

As a newsroom, we have but one hope for now: Please do not let these be the viewpoints of all Oklahoma Republican Party leaders. State Republicans of sound mind and heart, here’s a call to action: Let your chair people know how you really feel, or at the very least apply mental health screenings to the next round of applicants.