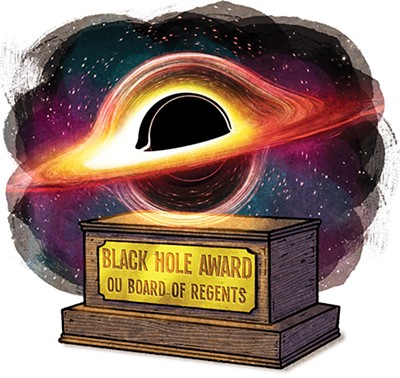 Add “Black Hole” to the list of names people call the University of Oklahoma (OU) board of regents — right next to “corrupt,” “failures” and probably a less appropriate type of hole.

Freedom of Information (FOI) Oklahoma presents the Black Hole award to an organization or individual “that has most thwarted the free flow of information” in a particular year. According to NASA, a black hole is something “so massive and dense that light” cannot escape it." And we really can’t think of a more fitting definition for the award’s list of recipients.

Andy Moore, FOI Oklahoma executive director, told OU Daily the OU regents received this distinction for their lack of transparency during the search for former president James Gallogly and their secretive selection of Joseph Harroz as interim president. The former led to the shortest presidential tenure in university history, and the latter resulted in the cringiest “We Are the Champions” lip-sync video ever, so we hope they learn from their mistakes.

“The organization hopes that the Black Hole Award can be a catalyst to encourage the recipient to make changes moving forward,” Moore said, “and we would be happy to recognize them for any changes made.”

We also hope the award has the intended consequences, but unfortunately the regents seem on track to rival two-time title-holder Fallin for least transparent.