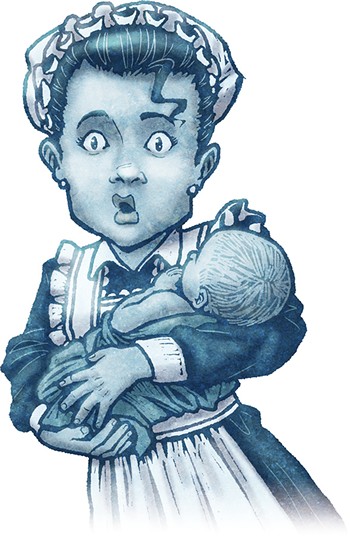 NBA players’ ghost stories about The Skirvin Hilton Oklahoma City, 1 Park Ave., are the basis of a recently announced movie starring Boston Celtic Kyrie Irving and produced by Imagine Entertainment. The hotel, opened in 1911, has been the setting for several disturbing stories in the past century.

Some stories, like the mysterious death of manager Frederick W. Scherubel in 1913, can be verified in contemporary newspaper articles, while others, specifically the one about the housekeeper who jumped out of an upper-story room with her baby in her arms, are mostly fodder for spooky listicles on clickbait sites — and The New York Times, which published an article (“Fright Nights in the NBA,” April 19, 2014) about the many visiting basketball players who have reported supernatural encounters or unsettling events while staying at the hotel before Thunder games.

The nation’s newspaper of record recounts the “inexplicable creaks, groans and bathroom shenanigans” witnessed by NBA players including Jared Jeffries, Derrick Rose and Jordan Hamilton, and writer John Branch inquires, “Is it any wonder that the Thunder had the league’s second-best home record?”

Irving, who made his big-screen debut in the feature-length Pepsi commercial Uncle Drew, had his own unpleasant encounter at the Skirvin in 2016 when he reported being bitten by bedbugs, which is so, so much worse than any part of Poltergeist. Metta World Peace, meanwhile, told the Orange County Register in 2016, “The ghosts were all over me. I just accepted it. They touched me all over the place. I’m taking one of the ghosts to court for touching me in the wrong places.”

No title has been announced for the upcoming film, but Chicken-Fried News is really hoping it will be a legal thriller called World Peace v. The Grabby Ghosts.