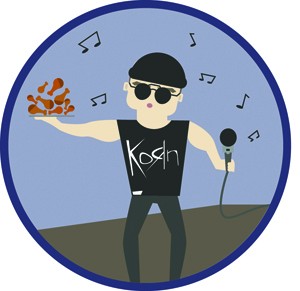 Neu-hesher rockers Avenged Sevenfold had to take a break mid-set during the Rockstar Energy Drink Mayhem Festival at the OKC Downtown Airpark. It wasn’t because of an ironic lack of energy but because someone climbed the scaffolding tower. And the band, along with everyone except the crowd, feared for the person’s safety.

After 15 minutes of flailing around 30 feet above the ground, personnel were able to get the person down unharmed and the show resumed.

Shame on Avenged Sevenfold! Obviously they were desperate for attention and put the person up to it. Who can blame them? They have been forced to follow Ice-T’s thrash group Body Count during the Mayhem tour.

The band reportedly ended their night in OKC with a Fear and Loathing in Las Vegas-themed party that included hot wings and members of Korn singing karaoke.