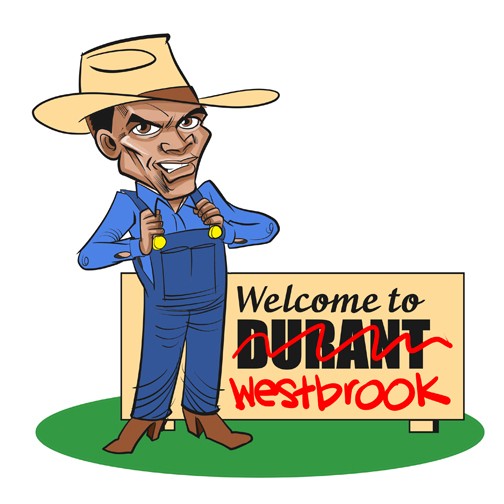 In unrelated Thunder-related news, in a move that sounds like the municipal version of a country music song, some Oklahomans are requesting a name change for the city of Durant.

Durant (DOO-rant) has no relation to former Oklahoma City Thunder superstar (and new Golden State Warrior) Kevin Durant (DURH-rant), but that didn’t stop Edmond resident Ryan Nazari from launching a Change.org petition to rename the city “Westbrook,” for Russell Westbrook, who recently signed an extension with the team.

The petition claims Durant (the basketball player) betrayed the state, “torn out our hearts and left our beloved Oklahoma City Thunder in depleted shape.”

Of course, the Bryan County seat wasn’t named for the basketball player, but for its founder, Dixon Durant. Members of the Choctaw Nation, which is headquartered in the city, Durant’s family (the Choctaw Nation members) traveled up the Trail of Tears, with his parents settling in the area that would someday bear his name.

But the history is irrelevant, according to the petition, which said the name “is just another hideous reminder of what happened to our community.”

Durant vice mayor Destry Hawthorn is even onboard, telling KOCO that a name change is a great idea and might finally solve the age-old argument of how to pronounce the city’s name.

At Chicken-Fried News press time, the petition had had almost 2,800 supporters. If it reaches 5,000, it will be delivered to Gov. Mary Fallin and Durant (or is it Westbrook?) mayor Stewart Hoffman.